Finca Bellavista is situated in the mountainous south Pacific coastal region of Costa Rica, called the Southern Zone. Markedly rustic and rural, this area is renowned as one of the most biologically diverse places on Earth. At an elevation of 650 to 1400 feet, the finca lies in the middle of a critical biological migration corridor called the Amistad de Paso corridor (nicknamed AMISTOSA). 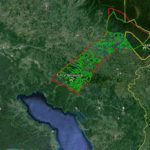 An aerial image of the AMISTOSA wildlife migration corridor

AMISTOSA essentially links two very important reserve areas – the Osa Peninsula and Cordillera de Talamanca. Recognized by the Costa Rica government as one of four ‘high priority’ corridors for conservation in the country, this corridor allows migratory animals to pass from one region to the next.

The Cordillera de Talamanca is a mountain range that spans the border of Costa Rica and Panama, and is included in the La Amistad National Park (also a UNESCO World Heritage Site) and Chirripo National Park. The Talamanca range is of global importance as it is an endemic epicenter for many plant and animal groups and as an important habitat for many large mammals like Tapir, Jaguar, and Puma. The Osa Peninsula is known as one of the most biologically intense places on earth, and is home to at least half of all species living in Costa Rica.