Finca Bellavista is situated in the mountainous south Pacific coastal region of Costa Rica, called the Southern Zone. Markedly rustic and rural, this area is renowned as one of the most biologically diverse places on Earth. At an elevation of 650 to 1400 feet, the finca lies within the AMISTOSA wildlife migration corridor that connects the Talamanca mountains and the Osa Peninsula. 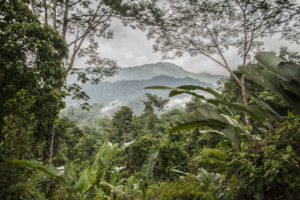 The 500-plus acres that comprise the finca contains secondary growth rainforest, and has become an interface zone between heavily cultivated lowlands and wilder forested highlands. Many portions of Finca Bellavista have been cleared at some point in history – whether for lumber, to create pasture for animals, or to grow crops – and is in various stages of regrowth.

Finca Bellavista’s ‘base camp’ is a reclaimed gravel pit (hence its flatness). After its life as a gravel pit, the indigenous community of Bellavista relocated on site, complete with a school, a soccer field, and a handful of families living and working the land. Bellavista’s school burned down, and the families relocated to surrounding pueblos. Signs of the past are everywhere – from old cacao and gmelina plantations to remains of old houses. 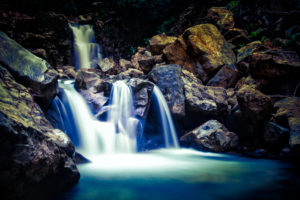 Finca Bellavista’s ‘red trail’ was historically used as a logging road. When the lands comprising Finca Bellavista were purchased, a muddy, eroded, canyon-like trail cut through the center of the property.  Homogenous forests exist where trees were planted to harvest – species like gmelina, teak and amarillon. On the northwestern edges of the finca, there are some primary trees – several were in various stages of being cut down and were abandoned during the milling process.

Finca Bellavista’s Community Guidelines and reforesting activities promote the regeneration of these lands, and improve the connectivity of the AMISTOSA.