Bats in the BAThroom!

Everyone at Finca Bellavista is a little batty. But I’m the worst of all.  One of the big selling points for me, when buying a treehouse at the Finca, was the colony of Greater White-lined Bats in residence on the outside of the bathroom screen at El Fenix. I just had to buy that house! And I have to admit this is not the first time my real estate purchases have been swayed by bats. When I was looking at a nice property in southern Ontario I was told there was a bat cave along a ridge of the escarpment. My own bat cave! That clinched it for me. Later I found out that the “bat cave” was actually a porcupine den, which was nice enough, although the prior owners must have thought Ontario bats were huge, based on the size of the droppings that they had thought were made by bats. 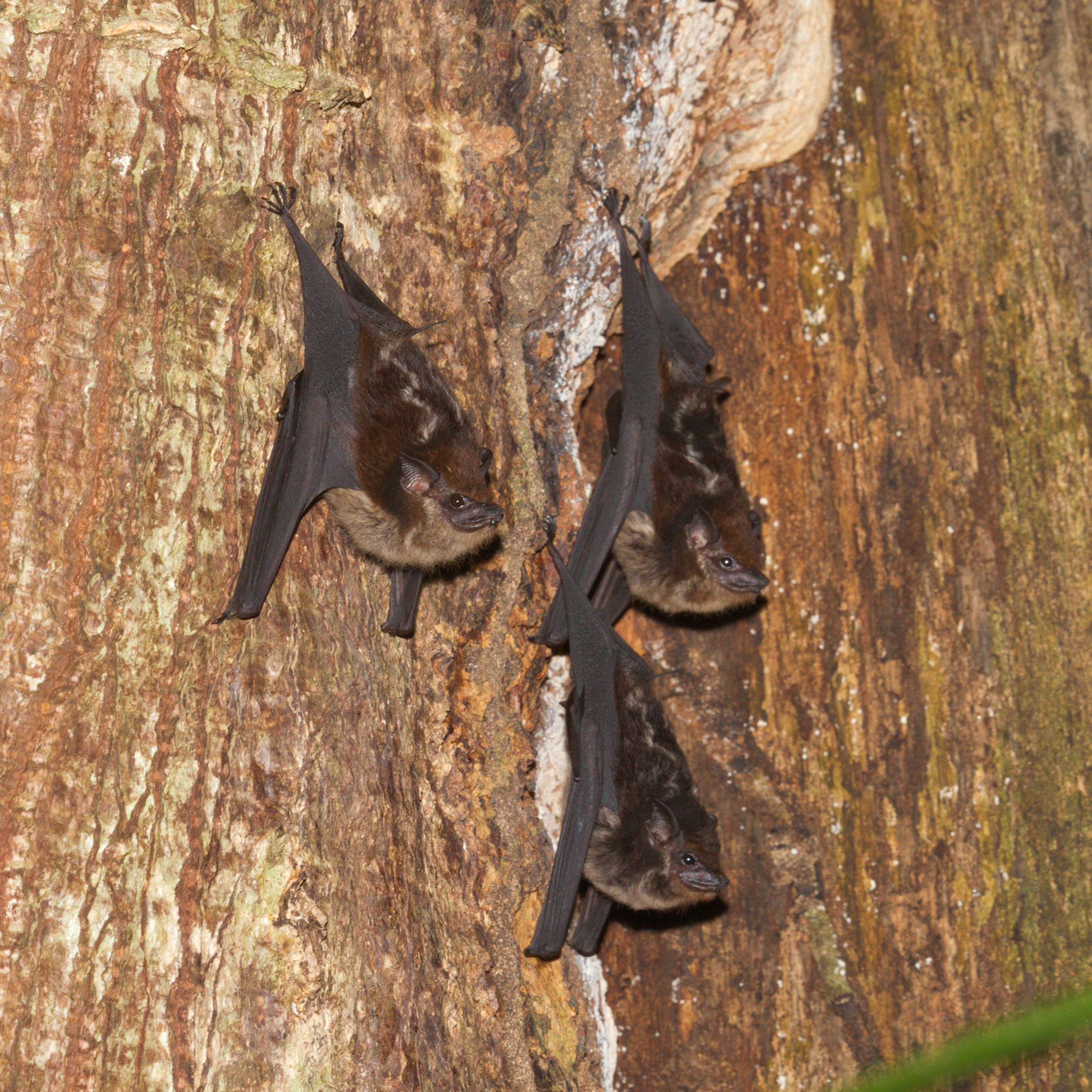 OK, getting  back to my bathroom bats… first, a bit of science: The Greater White-lined Bat, Saccopteryx bilineata, is a member of the sac-winged bat family, or Emballonuridae.   These bats tend to roost in more exposed areas than most bats, and because of this they remain quite alert by day; their large eyes demonstrate that they see well (all bats see, blind as a bat is simply untrue, although blinded bats can still find their way around using ultrasound, but I digress).  The “wing sac” that the family name refers to is a pouch that is found on the inside surface of the wings.  In the genus Saccopteryx it is placed along the edge of the forearm. These bats live in small harems, and at dawn and dusk the male “sings” to his females (the call is audible to those with good high-frequency hearing – i.e. younger than me) and hovers over them, shaking his wings and marking the ladies with his scented secretions from the wing sacs – a process known as “salting”. He may also use the scent to warn off intruders outside his harem.  But here is the cool part: for a long time this sac was thought to be glandular, but it is not well-supplied with blood vessels, and is actually more of a storage sac.  The male collects drops of urine, saliva and other bodily secretions and deposits them into the sacs while grooming.  Fermentation in the sac may result in individual and identifiable scent signals. So if you see a small bat fluttering around its roost you may be lucky enough to be marked by this fine scent! Certainly there is more going on that one might at first assume. 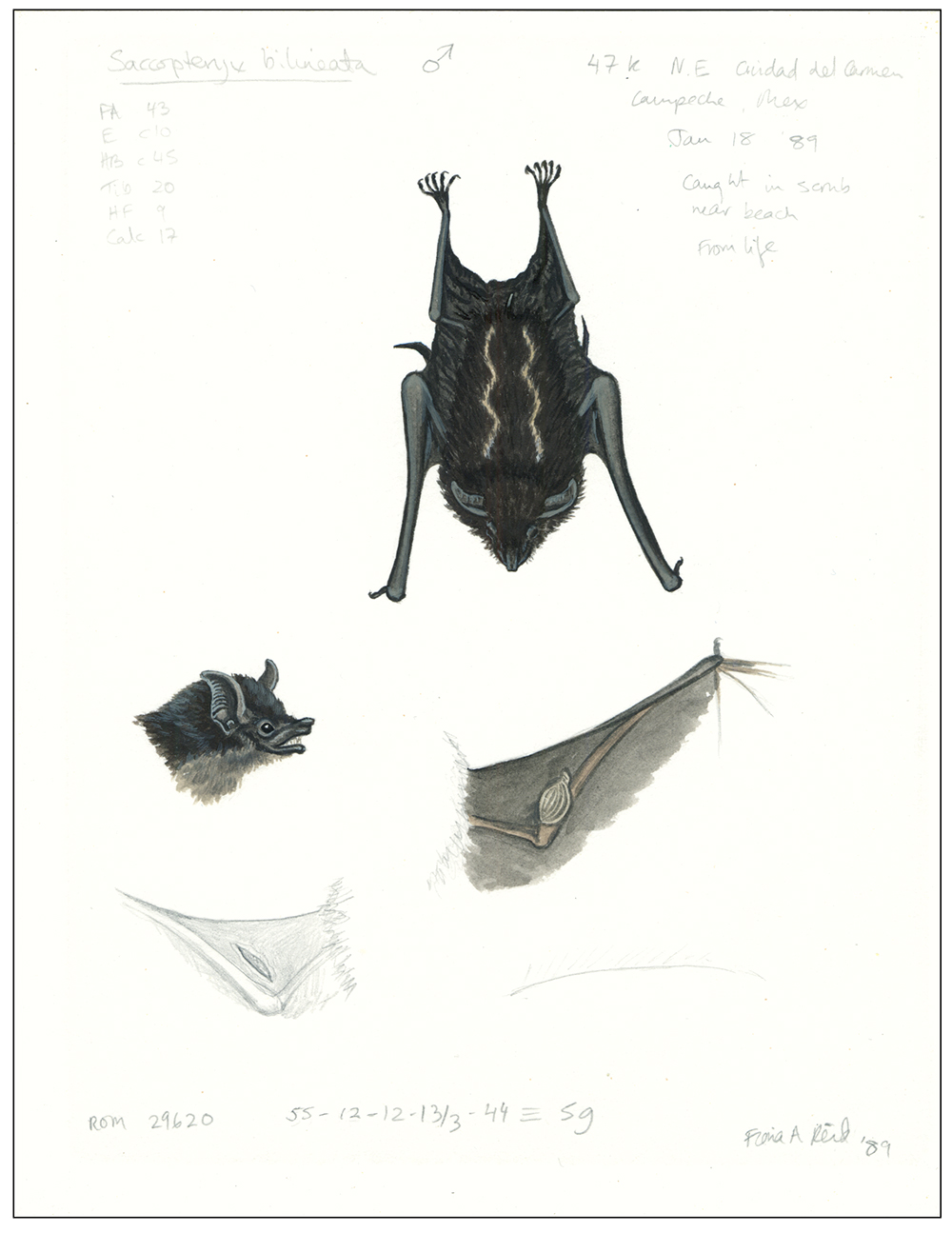 These bats have numerous types of vocalizations – courting trills, echolocation clicks, and adult territorial chirps. The pups have been recorded producing a jumbled mix of these distinct calls, similar to the babbling of human infants.  As they develop, they learn the right context for each call.  These mixed up sounds are the only record of babbling in mammals outside of primates and humans. 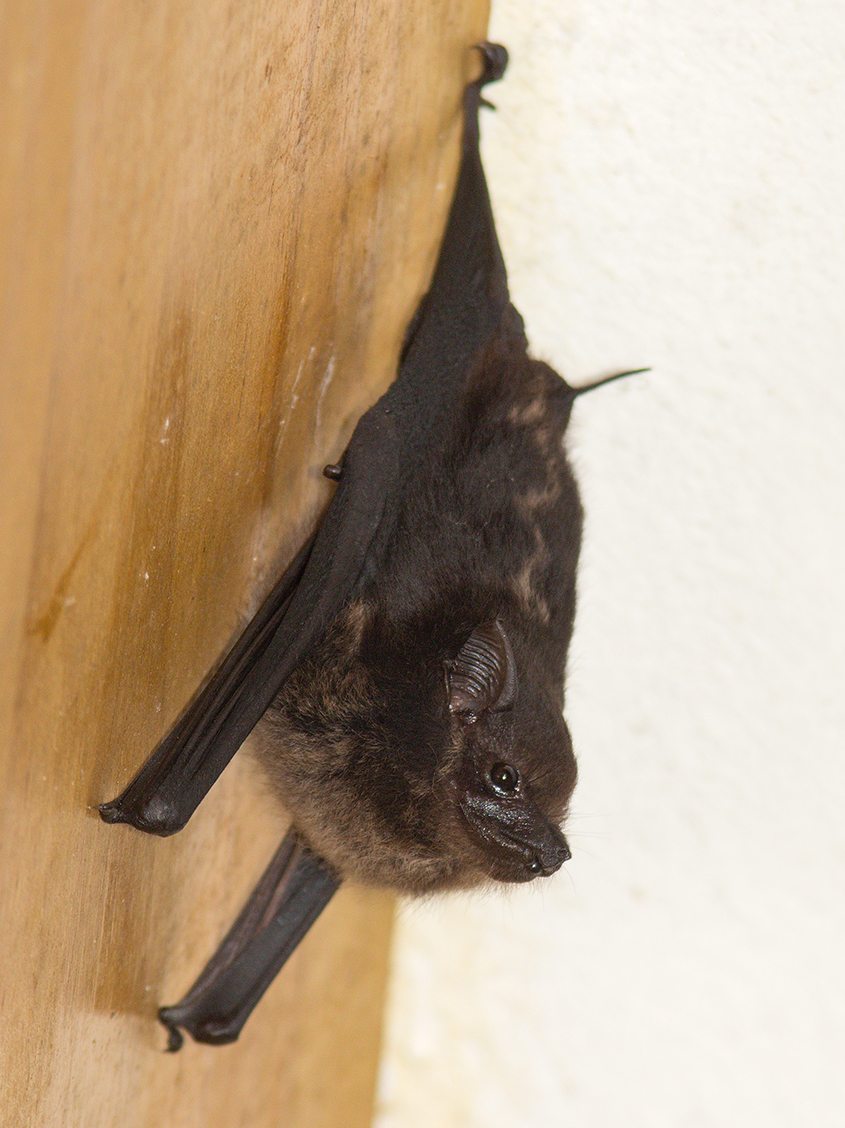 These attractive, small bats with their snappy pair of racing stripes can be found on most of the treehouses at the Finca.  I have seen them on Paraiso, Mariposa, my house El Fenix, and Castillo Mastate. Look for them on shaded parts of the support trees, or in the “wells” that dip below these same trees.  I am lucky to have them on the bathroom screen where they are easy to see (but hard to photograph) and also on beams on the ceiling of my lower deck. One sometimes likes to hang out in the patio.   They perform a very useful service in eating insects such as flies, mosquitoes, moths and small beetles, using echolocation to home into their flying prey.  They are very delicate, dainty bats. If they enter a room, leave a door open and the lights off and they will find their way out. Don’t try to catch them as you may harm them.   If staying in my house in early summer, check the bats for pups, tucked under a forearm.  I hope you will enjoy their company as much as I do.