How to Make a Killer Vegan Ceviche With Green Bananas

For newcomers to the world of vegan and vegetarian eating, developing a tasty cooking repertoire with meat substitutes can be challenging. It takes time to cultivate an understanding and learn how to process common and unknown vegetables, fruits and grains to mimic the taste, texture, and consistency of meat.

And sometimes, the substitutes just aren’t as good as the real deal. 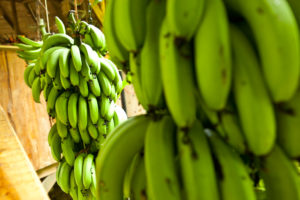 Ever wonder what to make with green bananas?

But one satisfying and surprisingly legitimate flesh substitute to make ceviche is green bananas… Seriously!

Traditionally, ceviche is made with fish or other ocean dwellers like shrimp, mussels and even octopus. Chopped in to tiny pieces, and marinated in lime juice, the citrus ‘cooks’ the seafood and has a tangy appeal that many tropical locales have evolved in to regional dishes.

Though it is becoming rare to see in Costa Rica’s Southern Zone, banana ceviche can sometimes be found on local dinner tables and roadside eateries. For several decades in the mid-to-late 1900’s, this region was home to United Fruit Company’s vast kingdom of banana farms. The majority of inhabitants to this region at the time lived and worked within those company farms, supplying the bananas that shipped out of United Fruit Company’s main port of operations in nearby Golfito. 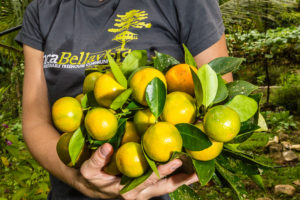 Tweaking the banana in to a multitude of palatable and healthy dishes was inherent to survival in these parts, and became a bit of an offshoot in the regional cuisine of La Zona Sur. Banana ceviche is a holdover from that era, and is a tasty tropical treat for those looking to try something unique, or for vegetarians searching for a substitute for fish ceviche.

If you come up short on finding banana ceviche in an eatery (likely), here’s an easy recipe to make your own.

*Green bananas should be firm, with no yellow ripening. (In the tropics, these usually come from fallen banana trees with unripe bunches.)

Juice limes with a strainer in to a bowl. In general, you want enough juice to soak and cover the ceviche mixture. Peel the green bananas. (This process can be a little time consuming, as the consistency of the banana should still be starchy, which makes the membrane between the fruit and the peel stringy and sticky.) Chop bananas in to small bits, and place in lime juice. Chop onion, red pepper, and cilantro and add to banana and lime juice mixture. Be sure there is enough lime juice to saturate all of the ingredients. If you like spice, add jalapeno or any other pepper to taste. A dash of orange juice can be added to cut the acidity of the ceviche with a touch of sweetness.

Place the mixture in the fridge to marinate for a few hours, or overnight. Serve with crunchy tortilla chips or crackers. Enjoy!

Erica Andrews is the creative mind behind the Finca Bellavista Treehouse Community in Costa Rica, and one of the neighborhood’s co-founders. Since the community’s inception in 2006, Erica has lived a life less ordinary, immersed in nature, in this off-grid rainforest paradise. Through the process of cultivating unique and meaningful experiences for guests, Erica has become intimately acquainted with visitors from all over the world, and with many special places in Central America. Her affinity for the Southern Zone region of Costa Rica has grown along with her knowledge of local spots, national culture, and the area’s flora and fauna.