Moths are fascinating creatures. While humans tend to gravitate towards either a camp of love or loathe when it comes to these elusive and unique insects, an air of intrigue certainly surrounds them. This cousin to the better-known butterfly are mostly nocturnal and appear in a broad spectrum of shapes, sizes, colors, and locations.

Usually only viewable at night via porch light or other artificial light source, these insects can be tough to observe and track. As a result, relatively little is known about moths in comparison to other species. The number of moth species is estimated to be between 150,000 and 500,000 on a global level, though more exact estimates evade biologists.

That’s one of the reasons why Friends of the East Brunswick Environmental Commission (a 501c-3 nonprofit organization) created National Moth Week. Similar to the Audubon Society’s annual Christmas Count event in December, National Moth Week encourages enthusiasts to set up monitoring stations to capture, observe, and document the moth in their particular zone. The information obtained during these events and submitted is important in growing the biological database on these mysterious creatures. National Moth Week’s goal for 2017 is to have 500 registered locations throughout the world to monitor during the last week of July.

On the evening of July 30, a National Moth Week collecting event is scheduled at Finca Bellavista Treehouse Community with biologist Fiona Reid, one of the community’s part-time residents. Reid is a Departmental Associate in Mammalogy at the Center for Biodiversity and Conservation Biology at the Royal Ontario Museum. She has led nature tours for the past three decades, showing eco-tourists the wildlife of diverse lands from Sri Lanka to Alaska and Argentina, and has written and/or illustrated numerous books, including A Field Guide to the Mammals of Central America and Southeast Mexico, The Golden Guide to Bats of the World, and Mammals of the Neotropics and the Peterson Field Guide to Mammals and Bats of Trinidad and Tobago. In addition to mammals, Fiona studies moths and nocturnal pollinators.

“I am excited to set up a light at the finca!” Reid says. “Moths are such a poorly known group of animals that it is quite common to find new distributional records or very rare animals.” 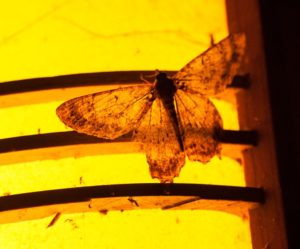 She plans to set up a portable UV light on a white sheet to bring the moths in for observation. “Nobody really knows why moths are attracted to lights, but it may be related to navigating using moonlight,” she says, adding that moths are not usually harmed by spending a few hours at a light. “You do have to be careful, though, to approach the lights slowly and look around at your feet, as some will land on the ground.”

She notes that moths are also sensitive to sound so it’s best to be as quiet as possible while in collecting mode to not scare them away.  “Some of the larger moths flap a lot before settling. It is best to keep your flashlight off those moths and leave them alone until they calm down,” Reid says. While it’s best not to touch moths (especially on the wings) some are quite docile and can be carefully moved to a natural background for nicer photos than on a sheet. “Moths are completely harmless to us, but some caterpillars can be toxic,” she reminds enthusiasts.

She predicts that in the rainforest, a number of other creatures will come to the lights as well. “Katydids and crickets, long-horn beetles, and sometimes predators of the moths like frogs, spiders and even salamanders come in,” Reid says. “You never know what you will see. I am sure we are in for a treat.”

In the unlikely event that the lights fail to bring in the moths, Reid sometimes uses a mix of fermented banana, beer and brown sugar. “In the tropics, there is often a shortage of salt due to all the rain, so sweat, saliva and even urine can work as well.”

Reid has a few tips for the amateur or home moth enthusiast. Start by simply turning on your outside lights and see what comes in. If you’d like to see more, portable UV lights can be purchased online and added to the mix, or moth traps that safely hold the moth overnight for observation. “Or go to an arboretum with a natural garden if you don’t have much natural habitat”, she says. 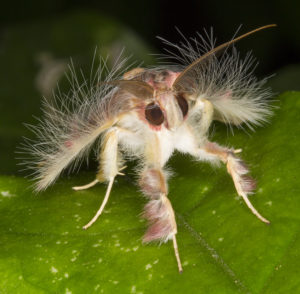 For beginners looking to improve their knowledge base of moths, she recommends picking up Discovering Moths, by John Himmelman. “It’s a great introduction to the world of moths”. In addition, connecting to the website for the Moth Photographers Group can help ‘moth’ers of all abilities with identification.

Reid’s favorite tropical moth is the Caramel or Fancy Moth (Ceroctena grata). “It is one of the most amazing. There are so many that have bizarre shapes, colors and interesting faces it is very hard to choose a favorite,” she says. Stay tuned in the weeks following National Moth Week for a full report of which moths Reid finds in the Costa Rica rainforest on July 30.

6 Things You Didn’t Know About Moths

Erica Andrews is the creative mind behind the Finca Bellavista Treehouse Community in Costa Rica, and one of the neighborhood’s co-founders. Since the community’s inception in 2006, Erica has lived a life less ordinary, immersed in nature, in this off-grid rainforest paradise. Through the process of cultivating unique and meaningful experiences for guests, Erica has become intimately acquainted with visitors from all over the world, and with many special places in Central America. Her affinity for the Southern Zone region of Costa Rica has grown along with her knowledge of local spots, national culture, and the area’s flora and fauna.